Our very own Jason Zurro was front and center stage last week at Dawson Elementary School's Career Day.  Jason was invited to speak to Dawson's 2nd grade class about his role as a Network Operations Manager and discussed several different areas of interest within the IT industry.

Students learned about the evolution of computers, from the old Commodore computers from the 1970s to the Chromebooks they use today. Using a hands-on learning approach, students were able to get a good look inside a modern-day computer to better understand how they work. 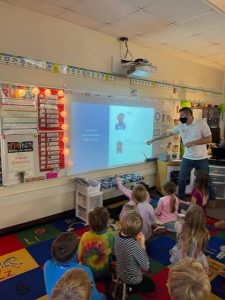 Jason also talked about cybersecurity and the importance of keeping passwords safe. At one point, Jason provided a visual demonstration of how a DDOS cyber-attack works.  He had one person throw a ball back and forth with him, showing how systems can easily deal with normal traffic.  He then had everyone in the class throw their ball at him at the same time (they were stress balls, Jason was unharmed).  He was unable to catch them all, demonstrating how systems can become overwhelmed when under attack.

Afterwards, Jason shared his thoughts with the team:  "I really enjoy sharing something that I am passionate about with others. It was great to have all these young minds engaged and asking questions.  I am not a professional educator, but I tried to explain things in ways that were relatable to them.  It was so much fun!" 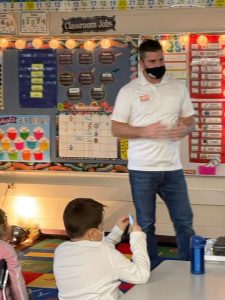 Great job, Jason!  At GRIT we believe that education in technology is continual and never-ending. When the opportunity to engage with our local community and students presents itself, we'll jump at the chance to educate and share our knowledge and passion with the next generation.

Improve your overall cybersecurity posture by empowering your workforce to recognize and prevent social engineering attacks. Our FREE eBook will teach you how to design and implement a cybersecurity awareness training program that works.Learn more here
+
Loading Comments...